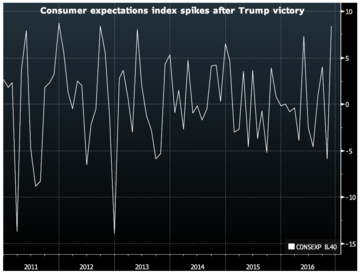 As we go into this Thanksgiving holiday, Americans are taking heart into the American economy for the first time since 2006.  This is especially poignant as we head into the largest shopping month of the year. Many retailers actually go from a loss to a profit starting this Friday.  In casual business speak, this is called going from being in the red into the black, hence the term “Black Friday”.

JeeMoney has a measured view of Black Friday.  While it’s ridiculous that people crush and stampede over the young and elderly at Walmart in order to save $5 on a toaster that they don’t need, it is a good time to get some major discounts on items that you do need.

Just treat others with respect, will ya?

On the surface, the message from the University of Michigan’s final reading of consumer sentiment for November is that President-elect Donald Trump will fix what ails the nation — fast.