Home Opinion World recession: Fasten your seatbelts: history’s about to repeat itself 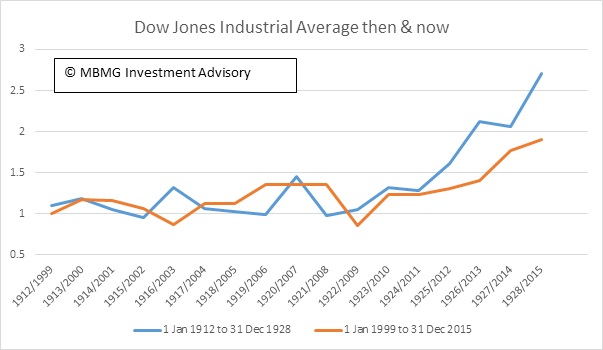 While I do think an official recession is near, having a repeat of the 1929-1932 stock market is not likely.

A couple reasons why:

Stock markets drop in such significant amounts when most people are forced to sell.  They would be forced to sell when they have margin calls by the margin lenders.

In the 1920s, the average investor was leveraged 10 to 1 (meaning, with $1000, they could borrow $9000).  Just a 30% drop in their stock means their entire equity was wiped out, and they owed an additional 20%.  The brokerage house would sell the investor’s stock to avoid losing more, and would send the investor a bill for the 20% loss.  This was a horrible situation as the individual investor did not have the cash, nor did he have the stock (in hopes of it going back up in value).

What the textbooks conveniently overlook is that by May of 1930, the market was back up to 80% of it’s all time highs.

The market had recovered remarkably…a 48% gain.  In May 1930, the market started a long 3 year decline to a final 89% loss.  What happened, then?  Herbert Hoover, in an effort to sustain the American economy, passed the Smoot-Hawley act, which put tariffs on imports, making American goods cheaper than the imported goods.  Other countries retaliated in return, leading to a massive halt in international free trade.  This ended up leading to American companies have a severe drop in sales, and laying off workers.  These workers needed to sell whatever they had (homes, stocks, valuables) to try to pay their debts…

If we try to save American jobs by forcing Americans to buy American goods, we most certainly will have a massive Depression.

In January he forecast the S&P 500 would drop 75 percent (to around 550 points), triggered by a recession starting this year, which would also be catastrophic for corporate debt-holders with defaults spiking to record levels.

Read Full Story: World recession: Fasten your seatbelts: history’s about to repeat itself

One chart shows all the bubbles that are about to pop