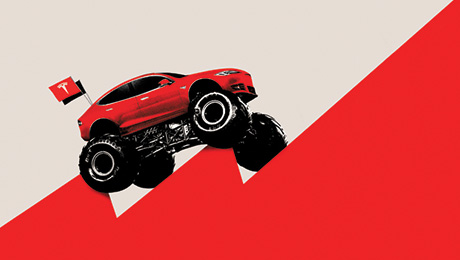 Whether or not Tesla is merging mass transit, personal transport and digital to form a great leap in transit remains to be seen.  Investors are buying into the “disconnecting from the electrical grid” and the hyperloop dreams.  As long as Elon Musk can continue to sell the dreams, I believe investors will be buying the dream.

In the market, since November 2016, there is a certain unbounded optimism that has started again.  The market is up 24%, which is the greatest one year advance in the market in over 50 years.  Is Tesla riding this wave to newer daily highs?  Or is it on its own path, separate from the market because it’s about to change the world?

In the former case, it’s better to short the stock.  In the latter case, it may be time to buy.

Personally, I wouldn’t be betting either way.  There are much safer stocks to buy.

H/T to Whitney Tilson for the article.

Source: Elon Musk Versus the Haters