Home News Would you want to make $2/hour? 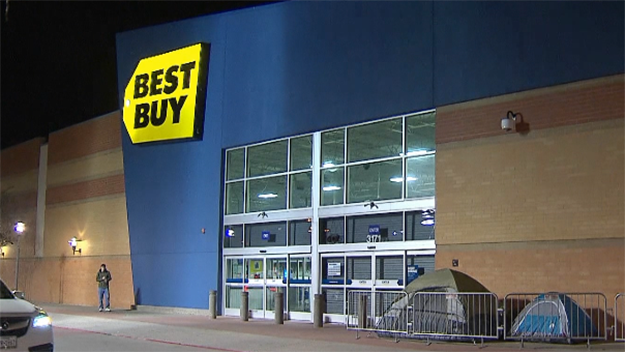 Efren Garcia of Dallas, TX, has been camped out since Saturday for a hot Black Friday sale, according to CBS-DFW.  More about this later.  I have to set up the fat pitch….

As the move to online shopping has been happening en force across all retail, I would have thought this would have made Black Friday easier for some.

Back in 2007, I remember watching a local news station interviewing someone in a cold, rainy Thanksgiving evening, who was tented up outside a Best Buy since that morning for the midnight Black Friday opening.  In between the chattering of her teeth, she said she was hoping to score a Free-After-Rebate (FAR) bluetooth headset. “This must be a sweet BT headset!”, I thought, and so I looked up the sale, and it was normally $15.  Sooooo, she waited in line for around 15 hours to save $15.  Time is money, friend….she valued her life at $1/hr.  Assuming the labor is similar, would she have worked as a Best Buy greeter for 15 hours and get paid $15?  No, I’m sure she would have thought that was absurd.  But waiting in line for 15 hours, this is clearly reasonable.

I remember the days, just a mere 5 years ago, when my friends and I would meet at the local Fry’s in San Marcos, CA at 4:30am. for a 5am opening.  Our friend who lived a couple miles away arrived a bit earlier at 4:15am and saved a spot in line.  Even then, our efforts, while somewhat radical, were fairly measured for a Black Friday loot run.  We would not spend more than 45 minutes in the crisp, frigid air just to save a few hundred bucks.  I mean, we have morals, you know?

Truth be told, we did our Black Friday raids for the camaraderie of doing something borderline foolish, somewhat akin to jumping into the December ocean water at night.  Afterwards, we’d head over to Starbucks to reminisce about Black Fridays of long ago while quaffing down dark roast coffee and chomping on our hearty pumpkin muffins (yes, please warm them up).

Now, in 2017, with most of these stores offering online purchasing by the warmth of your fireplace, Efren has been waiting since Saturday to save $300 on a TV.  What were you doing last Saturday?  He has been waiting in line since then and still has 36 hours to go (as of this writing).  “This must be a sweet TV!”, I am thinking.  I don’t know how much the TV is, but he is spending almost 150 hours to save $300.

On the bright side, for sitting around all week, he is getting paid twice a much as the 2007 Bluetooth lady, not adjusted for inflation.

I hope he can spend a few hours in his tent, being Thankful on Thanksgiving.

The rest of us will spend Thanksgiving being thankful for everything we have and then trampling kids and grannies to get things that we don’t have.

Good luck out there on Friday.

Black Friday is fast approaching, but one DFW man has already been camped out in line. Efren Garcia has been the first person outside of a Best Buy store since Saturday.

Source: Garland Black Friday Shopper Has Been In Front Of Best Buy For Days